At 22 years old I enrolled in community college for one class — medical terminology. Two weeks later I found out I was pregnant. Two weeks after that I was put on bed rest. I dropped out of college and didn’t look back. The next six years were filled with unemployment, retail employment, diapers, bottles, more diapers and a deep sense that I was never going to be anything more than a mom. NOT that there is anything wrong with being a mom — being a mom is my proudest accomplishment and my greatest joy. However, that doesn’t mean I am ONLY a mom. I tried to do the at-home courses like Penn Foster and various others but every time I gave up and it fell through the cracks. In 2007 I gave birth to my second child with my husband, David. It was after her birth that I started to have a desire to go to a “real” college. I applied to Mt. San Antonio College in Walnut, CA. I only signed up for one class since I felt that I would not be able to handle the work along with my children. It was a good thing in the end because I began working full-time because of a financial need in our family. It was what I had to do. I did fairly well in that class — receiving my first grade in a college — an A. I knew I could do this college thing. However, after winter intercession I began a downward spiral in to postpartum depression. I dropped the classes I had enrolled in for spring and that was that. The next few years included the birth of my third child, the death of my grandmother, and a change that was just barely blooming.

In spring of 2011 I enrolled full-time in college as I was not working (my husband was worried I would spiral again). I began the semester with intense fear, no self-worth and no confidence. But when I finished the semester I had gained two things – A’s in all 4 classes and something even better — hope. When fall rolled around I was ready for it. Or so I thought. When my English critical thinking professor walked in (and when she walks it is with purpose, by the way), I felt myself begin to retreat. But, thanks to my honors adviser and that little voice we call the conscience, I stayed. Betsy ended up being the exact teacher/mentor I needed to truly reach my potential. From that point on I still struggled but every semester my confidence rose as did my self-worth. I came to realize that being a mother was a major part of me, but not all. After much mentoring from Betsy I began to take that knowledge and her example of what it means to mentor someone and applied it to my life. I started to mentor my peers — either in academics or in personal issues in life. Still, I didn’t think I was the “right” person to be calling myself a mentor. Last August (2013) that all changed. When I arrived at the Pearson Leadership Summit in Boston I was Dianna – English major and part of the Student Advisory Board. I was going to teach college English and that was that. When I left Boston I became Dianna — mentor, tutor, blogger and (hopefully) motivational speaker. I realized that my passion was not limited to teaching, but to coaching and inspiring moms to attend college and pursue their dreams.

SO, what is this blog going to be all about? Well, everything from feelings of guilt, to easy meals, to the struggles you will face as a non-traditional student/mom in college. I am eager for input and am ready for all questions. I may not know everything there is to know, but I am more than willing to answer questions for moms (and non-traditional students) who need help! All you have to do is ask! 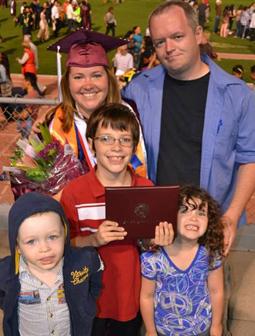 One thought on “Why I Blog”

This site uses Akismet to reduce spam. Learn how your comment data is processed.

Join 1,400 other followers
Follow College Success for Moms on WordPress.com