Before I begin, I will preface this by saying that I know how fortunate I am to have a spouse who supports my decision to pursue an education. Knowing the statistics, I am aware of the fact that over half of parenting students are single — I applaud you for your hard work if you are part of that number! If this is you, then consider replacing the partner or spouse to someone else — a mother, father, sister, cousin, aunt,etc.

I nearly lost David back in 2013 when he caught pneumonia and developed a lung infection normally only seen in aging adults. As long as I had known him, David had been healthy; However, due to the fact that he has a blood disorder which causes hemolytic anemia, his spleen was removed when he was a child, thus making him susceptible to major illnesses. To fight off both pneumonia and empyema, David endured several invasive procedures, including a Thoracentesis, before finally needing thoracic surgery that took part of his left lung. After surgery, David was required to remain on aggressive antibiotics pumped into his heart for about a month, along with several other medications. During that period of heartbreak and fear, I spent nights alone in our bed, or on the guest bed in his hospital room, meditating on how precious life is, and especially his. I had time to think about all that he had already contributed to our family and felt blessed. But we faced challenges before his health scare, too, and this experience allowed me to look back on all we had overcome in the years prior…

David and I had some major trials early on in our marriage. We rushed a bit and ended up expecting our daughter Sarah just six months after he proposed. We were married just four months before she was born. From the start, we bumped heads here and there, mainly because we are both stubborn, but also because we were struggling financially. This wasn’t something new for either of us, but learning to balance our budget was not a skill we were taught – especially not as a couple. Then when I suffered from postpartum depression six months after Sarah was born, we separated. Nearly a year later, I recovered and we reunited. I am glad that we overcame our struggles because we are definitely stronger as a team. We still have work to do, but who doesn’t? We are about to celebrate 10 years of marriage and it’s been an amazing journey as a wife, mom, and college student because of David’s love and support.

With that said, I want to say thank you to my husband, David. With this semester passing me by as both a student and instructor, he has felt the strain of my anxiety and stress. Yet, he has done his best to remain positive. I’m thankful for him and all that he does. You see, David is a 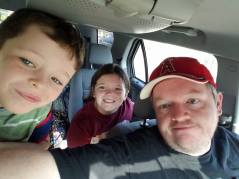 dad 100% of the time, maybe 120% if I am being honest. He wakes the kids up in the morning, gets them dressed, and takes them to school. After that, he comes home and, after a short break to watch a favorite TV show, he cleans. Then comes the afternoon school pick-up and homework time. He doesn’t sit around but if he did I wouldn’t blame him. Often, he is the one to make dinner, too. Oh and did I mention, he works part-time outside of the house also?

More specifically, when it comes to succeeding in college, David is my #1 supporter. Many people don’t know this, but David is the one who suggested I attend Mt. SAC (the local community college). He had gone there and loved it, so he thought I might too. He was right. Since I have been a student, David has always encouraged me to do my homework, to grade papers, to nap, or to do whatever it is I need to do in order to not fall behind. He works around my school schedule and he is always there when I need someone to talk to. I appreciate all of this. He is my very best friend.

Many of us have help we often take for granted. This supporter might be a spouse or partner, or a parent or friend. Please take the time to thank those who help you. Notice them; Don’t just take a mental note, it’s not good enough – tell them, show them. And please be present in their moments because they have been present in yours. I am still working to improve this myself.

Many moms in college have zero support from family, friends, etc. If you are like me, you are one of the few who is fortunate enough not to fall into that category. Never take that for granted.

So, thank you David, my geeky, hardworking, supportive husband – I couldn’t do this without you.

This site uses Akismet to reduce spam. Learn how your comment data is processed.

Join 1,401 other subscribers
Follow College Success for Moms on WordPress.com